Branka Čolić, German Croatian or a German native daughter of Yugoslav immigrants, knows those not completely restricted, yet hidden spaces of performance art as well as those of pop culture – from the inside.

Language is her preferred artistic medium and material. Branka writes, sings, performs, makes films and has a YouTube channel. Her works on paper – called texts, for short – will also be available in print soon. She studied acting, chemistry and art in Bremen and Hamburg. From 2004 to 2010 Branka was a fellow of the Cusanuswerk. In 2005, together with Anneli Käsmayr and Michael Rieken, she received the Prize for Fine Arts Bremen. For the concept "Brankart - self-optimization as an artist" she received the video art promotion award 2019.
At the moment she is working on the film "povratak -–Wiederkehr", which received the film start promotion in 2020.

A room of one’s own

The project's title refers to the essay by British writer Virginia Woolf from 1929. According to Woolf, two things are needed for women to be able to write fiction: "if we […] have five hundred [pounds] a year each of us and rooms of our own […]".

For Woolf, on the one hand, one's own space represents privacy, but she also sees it as a location. In her essay, Virginia Woolf formulates this space in different forms. Among other things, the space can be a place in history or the right to a share in cultural production. The work "A room of one’s own" positions itself precisely as such a discursive place of art production

For the period of four weeks the thealit project space is my "room of one’s own": my showroom and workstation. Art production in there becomes performative object, space becomes stage for art production. Processes of work become object and object becomes part of the process. The course of the artistic production takes place on site and becomes transparent to the outside, as the status quo of the work as well as individual sections are shown digitally and analogously on site.

The studio will be temporarily visible online on certain days at certain times.

Performances will take place there, which will also be shown on the Internet.

Dates and further information will be announced soon. 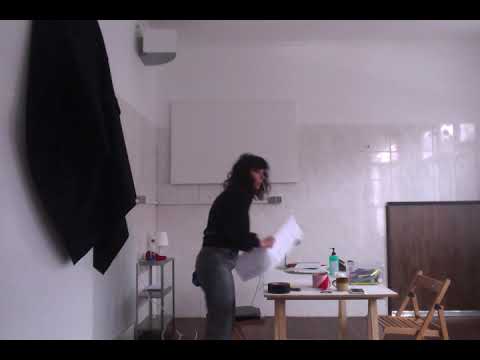 The first day in the Thealit's workroom. This video is the so-called test phase, before the livestream from the studio starting 11.11. where you can look Branka Čolić over the shoulder